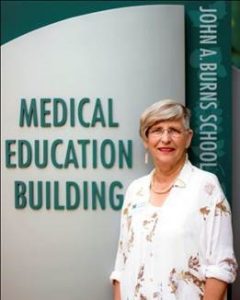 In addition to teaching students and public groups, she established the JABSOM Mini-Medical School on Healthy Aging (MMSHA) for the public, in collaboration with the UH Foundation in 2014. The goal of the MMSHA is to provide Hawai‘i’s citizens with information on the best way to maintain health and well-being as they age; over 300 community members have participated in the MMSHA each year. She has also collaborated with Oceanic Time Warner and Core Group One in developing an on-demand channel (342/1342) called iAGE. Her innovative teaching style and her continual advocacy for research and education, including opportunities for underrepresented groups, have earned her international recognition and enabled her to establish many productive collaborations around the world. She currently serves as Director of the MMSHA, provides mentoring to numerous colleagues and students, helps develop philanthropic opportunities and teaches topics related to viruses, speaking and leadership. 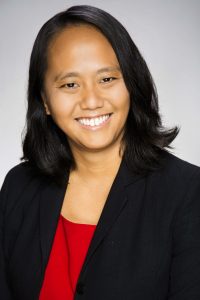 Present elected position
• House of Representatives, District 25 (Makiki, Tantalus, and portions of McCully, Manoa & and Papakolea)
• Co-convener of the Women’s Legislative Caucus & Member of the Judiciary’s Access to Justice Commission 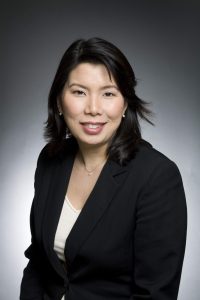 Lisa Maruyama is the President and CEO of the Hawai`i Alliance of Nonprofit Organizations, a statewide nonprofit organization working to strengthen and unite Hawaii’s nonprofit sector as a collective force to improve the quality of life in Hawaii.

Maruyama served previously as the Vice President of Public Affairs for Brightlight Marketing. Prior to this, Maruyama served as Executive Directors for the Pacific and Asian Affairs Council for nine years and the Mental Health Association for nearly three years. She has a particular focus in strategic thinking for systems change, nonprofit management, strategic communications and marketing, program development, sector level public policy issues and government relations.

Maruyama serves on the board of the Washington DC-based National Council of Nonprofits and chairs its Public Policy Committee. She is also on the board of the Transform Hawaii Government Coalition; Think Tech Hawaii; the Advisory Committee of the University of Hawaii at Manoa Public Administration Program; the City and County of Honolulu’s Age Friendly Cities Commission, and the editorial panel of the national publication Nonprofit Quarterly. She recently served on the Real Property Tax Commission of the City and County of Honolulu and the Sister State Commission for the State of Hawaii.

Maruyama received her BBA from the University of Hawaii at Manoa, Shidler School of Business. She is a Pacific Century Fellow, Weinberg Fellow, PONO Fellow and was designated Top Forty Under 40 by the Pacific Business News in 2001. She is married with two children, and is a proud volunteer of the American Youth Soccer Association.

Beth is a tireless advocate for the community, and through her leadership, ASB provides extensive support for Hawai‘i schools and non-profit organizations. She promotes volunteerism through ASB’s Seeds of Service program; a volunteer initiative that has contributed more than 22,000 volunteer hours to community service projects.

Under her leadership, ASB created its award-winning LifeBalance wellness program, which has led to ASB being recognized as a Gold-Level Start! Fit Friendly Company by the American Heart Association and one of the Healthiest Employers in Hawai‘i by Pacific Business News. ASB’s overall focus on the ultimate employee experience has led to Hawaii Business Magazine naming ASB a “Best Place to Work” for seven consecutive years and ASB’s selection as the winner in the large company category in 2015. ASB is the only Hawai‘i bank to be recognized for three consecutive years by American Banker Magazine as one of the Best Banks to Work For in America. In 2015, Fortune Magazine named ASB one of the 100 Best Workplaces for Women in America and No. 3 on Fortune’s list of 50 Best Workplaces for Diversity in America. Prior to joining ASB in 2008, Beth served as deputy general counsel of First Horizon National Corporation, a diversified financial services holding company, where she oversaw mergers and acquisitions and managed the legal division. She also served as general counsel at National Commerce Financial (NCF), which consistently ranked among the top five best-performing banks according to U.S. Bankers’ list of 100 largest banking companies prior to its merger with SunTrust bank in 2004. While there she served on the company’s executive committee, managed mergers and acquisitions as well as coordinated integration teams for NCF’s expansionary activities.

Beth graduated with honors from both the University of Mississippi, where she earned a Bachelor of Arts degree in English, and from the University of Arkansas School of Law, where she received her Juris Doctorate. An active member of the community, Beth is a board member for the YMCA of Honolulu, Hawaii Theatre Center and Helping Hands Hawai‘i. She also serves on the Board of Advisors for the Center for Banking and Finance at University of North Carolina School of Law.