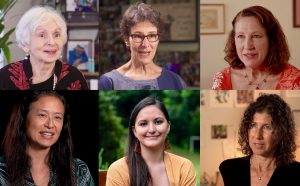 Want to attend a screening with an extensive discussion with its director? Scroll down to find out how you can attend The Perfect Candidate!

Reel Wāhine of Hawai‘i Season 2, a documentary filmed by women filmmakers about women in the local independent film scene, will be featured as part of the Hawaii International Film Festival on Saturday, Nov. 16 at the Regal Dole Cannery 1 at noon to 1:35 pm.

Please note that you must purchase your tickets for the Saturday, Nov. 16 showing through HIFF here.

AAUW Honolulu invites its members to support this documentary. We’ll be meeting at Tiny Pyramid at 560 N. Nimitz Hwy. after the showing at 2 pm to discuss the movie. A light, family-style lunch will be provided; drinks and desserts (they’re delicious!) can be purchased by the attendees.

Zambonelli is also offering 15 tickets to AAUW Honolulu members for The Perfect Candidate, directed by Haifaa Al-Mansour, this year’s HIFF feature spotlight filmmaker. Al-Mansour broke ground with her debut film, Wadjda, the first film shot entirely in Saudi Arabia — and the first made by a Saudi woman. The screening is an extended “master class” discussion with Al-Mansour. Use the code MAHALO39 to claim your ticket — but act fast, there’s only 15 available! The film begins at 3 p.m. on Nov. 16, following the lunch.