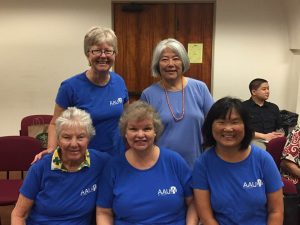 Bills that help to further the issues of equal pay, regardless of sex, and to institute federal Title IX protections within the state passed Hawaii’s conference committees — both bills are supported by the Women’s Legislative Caucus. They have been recommended for passage on final reading, which occurs on Tuesday, May 1. The final step will be Gov. David Ige’s signature.
The equal pay bill, SB2351, would prohibit employers from requiring an applicant to provide her/his wage history when applying for a position. Policies that force employees to keep wage information secret will be illegal under the bill. AAUW’s position is that disclosing women’s salary histories and stopping workers from talking about their earnings perpetuates the wage gap. Many AAUW members submitted testimony supporting the equal pay bill and should be congratulated for their efforts ensuring that this bill will become law.
A bill that establishes some of the same protections of federal Title IX laws, HB1489, also passed. Any Hawaii education program that receives funds from the state would be prohibited from discriminating on the basis of sex, gender identity, expression and orientation. AAUW has supported Title IX protections since the early ’70s and believes extending these protections at the state level is important.
View More