AAUW Honolulu member and former president Linda Weiland penned this op-ed to recognize the anniversary of the passage of the Violence Against Women Act. Read it here or if you aren’t a subscriber to the Honolulu Star-Advertiser, read it below.

The Violence Against Women Act, or VAWA, is a reflection of how serious society now views domestic crimes and crimes against females.

In 2017, victims of those offenses have resources, services and laws to fall back on: A federal rape shield law that prohibits the past sexual history of the complainants to be brought up in court. Protections against eviction by women who are being stalked. Funding for prevention programs, rape crisis centers and hotlines. Legal aid, and aid for immigrant women, women with disabilities and who are minorities. 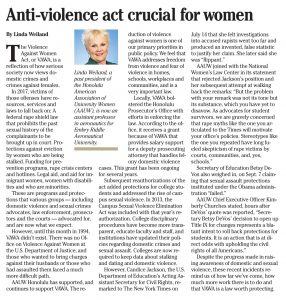 These are programs and protections that various groups — including domestic violence and sexual crimes advocates, law enforcement, prosecutors and the courts — advocated for, and are now what we expect.

However, until this month in 1994, VAWA didn’t exist. There was no Office on Violence Against Women at the U.S. Department of Justice, and those who wanted to bring charges against their husbands or those who had assaulted them faced a much more difficult path.

AAUW Honolulu has supported, and continues to support VAWA. The reduction of violence against women is one of our primary priorities in public policy. We feel that VAWA addresses freedom from violence and fear of violence in homes, schools, workplaces and communities, and is a very important law.

Locally, VAWA bolstered the Honolulu Prosecutor’s Office with efforts in enforcing the law. According to the office, it receives a grant because of VAWA that provides salary support for a deputy prosecuting attorney that handles felony domestic violence cases. This grant has been ongoing for several years.

Subsequent reauthorizations of the act added protections for college students and addressed the rise of campus sexual violence. In 2013, the Campus Sexual Violence Elimination Act was included with that year’s reauthorization. College disciplinary procedures have become more transparent, educate faculty and staff, and institutions have updated their policies regarding domestic crimes and sexual assault. Colleges are now required to keep data about stalking and dating and domestic violence.

However, Candice Jackson, the U.S. Department of Education’s Acting Assistant Secretary for Civil Rights, remarked to The New York Times on July 14 that she felt investigations into accused rapists went too far and produced an invented, false statistic to justify her claim. She later said she was “flippant.”

AAUW joined with the National Women’s Law Center in its statement that rejected Jackson’s position and her subsequent attempt at walking back the remarks: “But the problem with your remark was not its tone but its substance, which you have yet to disavow. As advocates for student survivors, we are gravely concerned that rape myths like the one you articulated to the Times will motivate your office’s policies. Stereotypes like the one you repeated have long fueled skepticism of rape victims by courts, communities, and, yes, schools.”

AAUW Chief Executive Officer Kimberly Churches stated, hours after DeVos’ quote was reported, “Secretary Betsy DeVos’ decision to open up Title IX for changes represents a blatant intent to roll back protections for students. It is an action that is at direct odds with upholding the civil rights of all Americans.”

Despite the progress made in raising awareness of domestic and sexual violence, these recent incidents remind us of how far we’ve come, how much more work there is to do and that VAWA is a law worth protecting.

REPOST from @aauw.uhmanoa - Join the UHM Office of Civic and Community Engagement in partnership with the American Association of University Women at UHM (AAUW at Mānoa RIO), Student Parents at Mānoa (SP@M), and the Truth, Racial Healing, and Transformation Campus Center (TRHT) part of the UHM Native Hawaiian Place of Learning Office to discuss the question: "where do we live?"It's a simple question that makua and keiki alike understand. We can think about our homes, the streets we live on, the valley, the ocean, the moku, the ahupuaʻa, the island, the nation. But residing on the unceded lands of Kō Hawaiʻi Paeʻāina, “where do we live?” is a fundamental question in another sense. Many of us are settlers residing on ‘āina that is stewarded by Kanaka Maoli. Kanaka Maoli and ‘āina are one community. How can we start to expand our understanding of ʻāina to inform our kuleana as Kanaka Maoli and settlers to know where we live and in knowing this share with our keiki, the next generation?Our speaker, Sonya Zabala, is the mother of four Kanaka Maoli young people. She is a Filipina American married to a Hawaiian National. She allows her understanding of ʻāina to inform her parenting and to the people of Hawaiʻi by prioritizing the reclamation of Hawaiian systems of knowledge. Sonya works in the Native Hawaiian Place of Learning Advancement office at the University of Hawaiʻi at  Mānoa and is a design team member for UHM’s Truth, Racial Healing and Transformation Campus Center.Community engagement with large group discussion and smaller breakout rooms among parents and caregivers will also take up a portion of this event. Please join us by RSVPing through our LinkTree! ... See MoreSee Less
View on Facebook

The Fall 2021 Career and Leadership Development Grant application deadline is tomorrow! Are you a working woman seeking to enhance and improve your career? Are you a graduate student or academic looking to share your research with colleagues at conferences?Grants of up to $4,000 each are available to women who are currently living and/or working and/or studying in Hawai‘i. Visit our website to apply by October 15th, 2021! ... See MoreSee Less
View on Facebook