Bev Munson, AAUW Honolulu member and chair of the advocacy committee, penned a opinion piece about the passage of the 19th Amendment that was published on Aug. 15. Read it here, or if you aren’t a subscriber to the Honolulu Star-Advertiser, read it below. 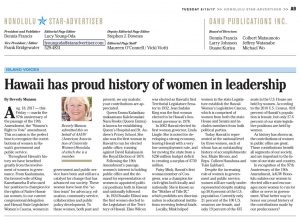 Hawaii has proud history of women in leadership
By Beverly Munson
August 15, 2017

Aug. 18, 2017 — this Friday — marks the 97th anniversary of the passage of the 19th Amendment, the “Women’s Right to Vote” amendment. This occasion is the perfect time to recognize the contributions of women in Hawaii’s government and public service.

Throughout Hawaii’s history we have benefited greatly from the involvement of women in governance. From Kaahumanu, the favored wife of King Kamehameha II who used her position to champion for the rights of Native Hawaiian women, to our current congressional delegation and Hawaii State Legislative Women’s Caucus, women in government and public service have been and still are a catalyst for change that has advanced our society. These women have been the “action team” for advocacy, education, community service, collaboration and public policy development. To these women, both past and present, we say mahalo; your contributions are appreciated.

Queen Emma Kalanikaumakaamano Kaleleonalani Naea Rooke (Queen Emma) is known for establishing Queen’s Hospital and St. Andrew’s Priory School. She also was the first woman in Hawaii to run for elected public office, running against David Kalakaua in the Royal Election of 1874.

Following the 19th Amendment’s passage, women’s interest in holding public office and the demand for representation of women in appointed political positions both in Hawaii and nationally followed.

In 2002 Hawaii elected its first woman governor, Linda Lingle: She is noted for developing a strong economy, leaving Hawaii with a very low unemployment rate, and for moving the state from a $250 million budget deficit to creating a surplus of $730 million.

Patsy Mink, Hawaii’s first woman member of Congress, was a champion for civil rights both locally and nationally. She is known as the “Mother of Title IX,” which prohibits sex discrimination in educational institutions receiving federal funds.

Locally, Mink helped women in the state Legislature establish the Hawaii Women’s Legislative Caucus, which is comprised of women from both the state House and Senate and includes members from both political parties.

Today Hawaii is represented at the national level by three women, each of whom has an outstanding history of accomplishments: Sen. Mazie Hirono, and Reps. Colleen Hanabusa and Tulsi Gabbard.

As history has shown us, the contributions of women in public office are great. These contributions benefit all segments of our society, and are important to the future of our state and country.

In recognition of the 97th Anniversary of the 19th Amendment, AAUW Honolulu salutes our women in elected office and encourages more women to run for office or serve in government. What better way to honor our proud history of the contributions made by our predecessors?