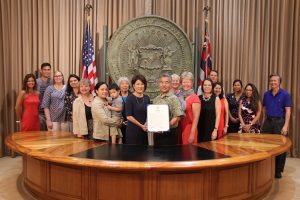 Equal Pay Day marks the day when women’s salaries match those of their male peers from the previous year.

AAUW branches across the US educated the public about the significance of the event and what things need to change with regards to law, policy, and American ideas about men and women to diminish the gender pay gap. Honolulu branch participated in activities on the day, and in the week leading up to April 4.

Members of Honolulu Branch attended Mayor Ige’s Proclamation of Equal Pay Day, organized by AAUW-Hawaii, and attended by members of all three Oahu branches. We were delighted to have a small child join in the event with his mother, showing gender pay equity has the potential to improve the lives of children, women, and men in Hawaii and across the U.S.

Two other events occurred prior to Equal Pay Day. AAUW Honolulu was represented on Hawaii Public Radio, in a one-hour segment of Town Square hosted by Beth-Ann Kozlovich focused on the gender pay gap. In addition, AAUW Honolulu, in coordination with the YWCA, the Hawaii Commission on the Status of Women and Hawaii Appleseed organized a “salary negotiation” informational event at the YWCA on Monday, April 3.

Equal Pay Day was observed by two proclamations, signed by Governor David Ige and Mayor Kirk Caldwell. Honolulu Branch members also supported a lobbying educational event at the Hawaii State Capitol, organized by AAUW Hawaii, the Hawaii State Commission on the Status of Women, the YWCA, and Hawaii Appleseed. The group visited most of the offices of State House Representatives and Senate, speaking with many of the office staffs, and senators and representatives about the gender pay gap. AAUW materials were left in all the offices, and we can anticipate an equal pay bill in the 2018 Hawaii legislative session.

If you missed Equal Pay Day this year, get involved in the AAUW Honolulu Branch Advocacy Committee, and join Younghee, Bev, Judy, and Sue in future educational advocacy events.

Sadly, there will be another Equal Pay Day next year — at current rates, women will not achieve gender parity for many more decades.