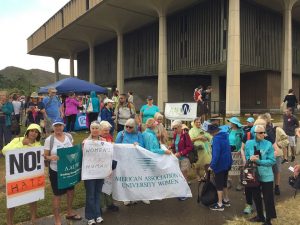 Despite rainy weather, thousands of women gathered at the Hawaii State Capitol in support of women’s rights.

AAUW Hawaii — in addition to other organizations including ACLU – Hawaii and Planned Parenthood — was a sponsor of the Honolulu march. Despite the size of the march around the world, no arrests were reported in the march at Washington DC and in the other marches held the same day around the world.

To view a gallery of the march, click here.

This historic event plans to be a springboard for continuing advocacy to advance women’s rights. The march is calling on those that participated, and those who support the cause, to take 10 actions in 100 days. The first action to organize, or “huddle”, to visualize a more equitable world in four years and what’s needed to get there.