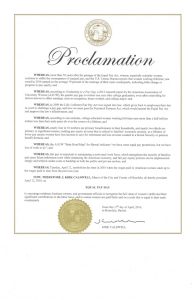 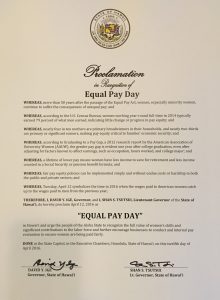 AAUW Honolulu’s advocacy chair, Susan Wurtzburg, was instrumental in focusing attention on the gender pay gap and equality in Hawaii by organizing a variety of 2016 Equal Pay Day activities on Oahu.

Governor David Ige and City and County of Honolulu Mayor Kurt Caldwell, signed proclamations acknowledging Equal Pay Day and committing their respective administrations to equal pay for equal work. In addition to members of AAUW Honolulu, Catherine Betts, executive director of the Hawaii State Commission on the Status of Women, and representatives from Planned Parenthood of the Great Northwest and the Hawaiian Islands and the US Department of Labor and attended the signings.

AAUW Honolulu and Windward members and students organized events at UH Manoa and Windward Community College to educate the campuses of the impact of the wage gap on women in Hawaii.

The day ended with an (un)Happy Hour at downtown watering hole Ferguson’s Pub, which offered discounted drinks and appetizers to those observing Equal Pay Day at 14 percent off — a reminder of the 14 cent difference between what the sexes are paid in Hawaii and that much work still needs to be done to close the gap.

Given that the pay gap is projected to last another 100 years at our current rate of progress…See you next year!

Mahalo to volunteer Beverly Munson! Bev has recruited and led a team of volunteers since 2019 for AAUW Honolulu to offer Wahine Work Smart salary negotiation workshops. She also manages the Book Discussion Group for AAUW Honolulu. “It was such a wonderful opportunity to continue using the skills I’d developed in my career,” says Bev. “However, I got more than I gave. I met so many intelligent and engaging women through these Work Smart Programs who have now become special friends. I am especially grateful for the talent and energy put forth by my Work Smart Teammates. They are true treasures! Volunteering with AAUW has enhanced my life in so many ways, I can’t list them all!” ... See MoreSee Less
View on Facebook

#ClosetheGap Today, August 3rd, is Equal Pay Day for Black Women in the USA, but also for the Native Hawaiian and Vietnamese women. Did you know – Women in Hawaii typically make $0.83 for every dollar paid to men, and Black women in Hawaii typically make $0.71 cents for every dollar paid to white men? (National Women's Law Center)Read AAUW National's article, The Simple Truth About the Gender Pay Gap: www.aauw.org/resources/research/simple-truth/ ... See MoreSee Less
View on Facebook