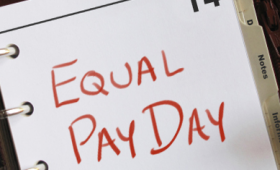 Equal Pay Day is the symbolic day when women’s earnings “catch up” to men’s earnings from the previous year. It’s also a powerful occasion to raise awareness about and organize action around the gender pay gap in your community.  This year, Equal Pay Day will be observed on Tuesday, April 12th.

Did you know that women typically work an extra 14 or 15 weeks in the following year to make the same amount earned by men in the previous year? This means that women are working an extra 70-75 days more than men to reach the same goal. Aghast?  You should be!  So what can you be doing?

You can contact Susan Wurtzburg,  Advocacy Chair, AAUW-Honolulu), susan.wurtzburg@gmail.com,  and tell her that you want to be involved.  We have plans on the day that may include receiving proclamations from the Governor and the Mayor of Honolulu.   A noon event is being planned; Participate and help our voice be heard.

Join us for our “Women Mean Business” event on November 4th, 2021 from 12pm-1pm (via Zoom)Female business executives are invited to virtually participate in a speaker panel. Speakers will share their professional challenges, memorable triumphs and how they overcame common obstacles faced by female executives. Those who RSVP for the event will be asked to provide question(s) for the speakers so that the speakers may prepare a response in advance. Attendees may have an opportunity to have the question that they submit to be answered by the speaker(s).Visit our website to sign-up! ... See MoreSee Less
View on Facebook

REPOST from @aauw.uhmanoa - Join the UHM Office of Civic and Community Engagement in partnership with the American Association of University Women at UHM (AAUW at Mānoa RIO), Student Parents at Mānoa (SP@M), and the Truth, Racial Healing, and Transformation Campus Center (TRHT) part of the UHM Native Hawaiian Place of Learning Office to discuss the question: "where do we live?"It's a simple question that makua and keiki alike understand. We can think about our homes, the streets we live on, the valley, the ocean, the moku, the ahupuaʻa, the island, the nation. But residing on the unceded lands of Kō Hawaiʻi Paeʻāina, “where do we live?” is a fundamental question in another sense. Many of us are settlers residing on ‘āina that is stewarded by Kanaka Maoli. Kanaka Maoli and ‘āina are one community. How can we start to expand our understanding of ʻāina to inform our kuleana as Kanaka Maoli and settlers to know where we live and in knowing this share with our keiki, the next generation?Our speaker, Sonya Zabala, is the mother of four Kanaka Maoli young people. She is a Filipina American married to a Hawaiian National. She allows her understanding of ʻāina to inform her parenting and to the people of Hawaiʻi by prioritizing the reclamation of Hawaiian systems of knowledge. Sonya works in the Native Hawaiian Place of Learning Advancement office at the University of Hawaiʻi at  Mānoa and is a design team member for UHM’s Truth, Racial Healing and Transformation Campus Center.Community engagement with large group discussion and smaller breakout rooms among parents and caregivers will also take up a portion of this event. Please join us by RSVPing through our LinkTree! ... See MoreSee Less
View on Facebook