Over 50 years ago landmark federal legislation made it unlawful for an employer to discriminate based on gender.  So after five decades surely men and women are finally treated equally in the workplace, particularly when it comes to measurable like salaries and wages for similarly situated individuals, right?

Wrong.  Incredibly, women today make just 86 cents to a man’s dollar.  In Hawaii in particular, statistics reveal that the average annual earnings of a woman working full-time are $40,162 compared to $46,768 for a man.

On November 10, 2015, AAUW Honolulu and the YWCA of Oahu hosted a public policy forum– Closing the Gap in Gender Pay Equity in Hawaii — at Elizabeth Fuller Hall, YWCA Laniakea in Honolulu.  Over 45 registered attendees and an accomplished panel of speakers examined why this gap still exists in Hawaii, and discussed both legal and public policy approaches to bridging the gender wage gap. 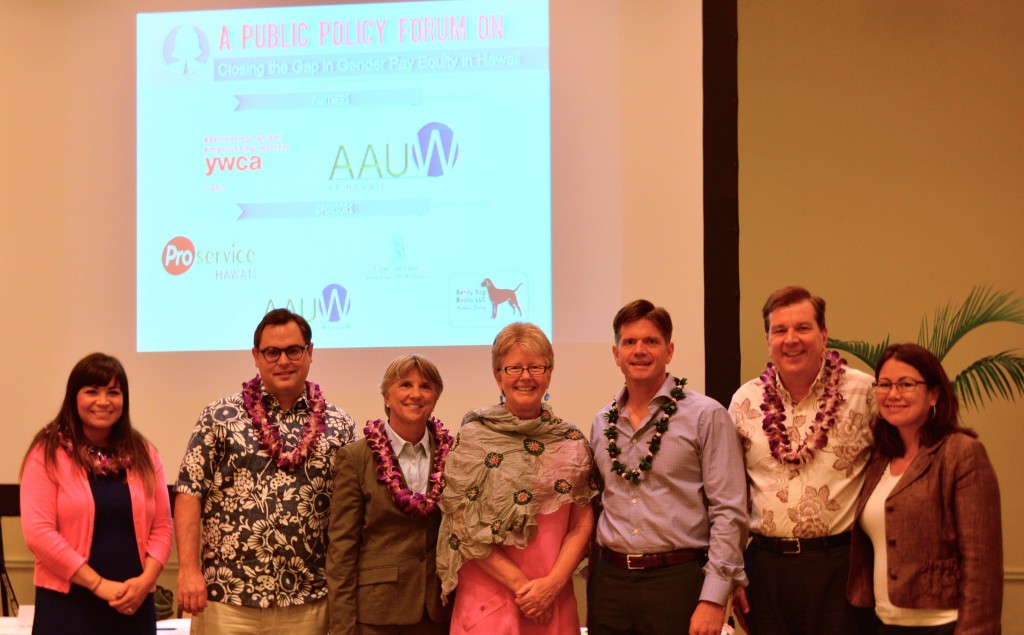 The panel kicked-off the forum by discussed the nearly half-century old federal legislation and the state’s counterpart law, highlighting the challenges faced in enforcement.

Title VII of the Civil Rights Act of 1964 makes it “an unlawful employment practice for an employment agency … to discriminate against, any individual because of his race, color, religion, sex, or national origin” (Title VII, SEC. 2000e-2. [Section 703] (b)).  While seemingly straightforward, Dr. Krieger explained that case law indicates that the federal law may only be enforced when a plaintiff can demonstrate and employer’s “intent to discriminate” which is an extraordinarily high threshold.  In contrast, Hawaii Revised Statute Chapter 378: Employment Practices, Section 2 states that “race, sex including gender identity or expression, sexual orientation, age, religion, color, ancestry, disability, marital status, arrest and court record, or domestic or sexual violence victim status” are protected categories, and “unlawful discriminatory practice” in employment may not be practiced against people holding these characteristics.

Hawaii courts, however, have never been asked to interpret or enforce this law.  In other words, no one has ever filed suit under the Hawaii statute.  As a result, state case law is not yet narrowly interpreted (like the federal counterpart) to require a litigant prove employer discriminatory intent.

While litigation is one method to remedy gender wage discrimination on a case-by-case basis, the panel suggested that a more useful approach would be to change public policy, an approach proved successful in California in the related area of family leave policy.

Significant policy change was achieved in California in 2004 with its Paid Family Leave policy. Dr. Colin Moore spoke enthusiastically about how the policy provides 55% of an individual’s salary for a maximum of six weeks in any given twelve-month period.  Notably, there now has been a sufficiently lengthy time frame to analyze the effects of the policy on both employees and employers, and studies of both groups demonstrate positive outcomes with only a small increase of payroll taxes.

Outcomes, like those in California, need to be publicized in Hawaii.  Our past two legislative sessions saw the introduction of paid family leave bills, and in 2016, the wording will be tweaked and presented once again to the legislature.  Panelist Cathy Betts highlighted this process, and also drew attention to the unique dynamics of Hawaii: Namely, that gender pay gaps here have significant negative effects on women and children in our “blue collar” families.

Effects reinforced again this year in September 2015 with AAUW’s published analysis of Hawaii’s pay gap (AAUW “The Fight for Pay Equity: A State Road Map for Hawaii” available here).  Among other recommendations for change in the report was the restriction on employers from requesting a potential employees’ pay history, especially since women tend to be underpaid thereby perpetuating economic subservience. In addition, employers could be required to advertise pay ranges in job advertisements in order to provide data necessary to argue for a gender equitable salary when negotiating for employment upon receiving an offer.