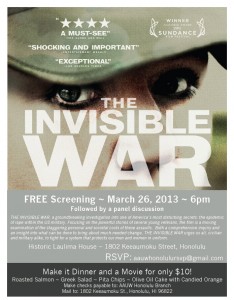 Today a female soldier in Iraq or Afghanistan is more likely to be raped by a fellow soldier than killed by enemy fire. The Invisible War, an Academy Award nominee for Best Documentary Feature, reveals the epidemic of rape within the U.S. military—and exposes the humiliating choice many soldiers are forced to make between speaking up and serving their country.

Nonpartisan and fair minded, The Invisible War exposes these devastating crimes and acts as a catalyst for long overdue political and cultural change.